I had to work most of Saturday–and it was gorgeous out! But the good thing about this time of year is our length of daylight–we’re light by 5:30 am (which is when my alarm went off, not when I got up) and are staying light til late in the evening. So an after-work run to a few favorite local birding spots is totally doable.

First of all, Arctic terns have arrived!

I love Arctic terns. Their noises and their ability to hover make me cheery no matter what my mood. They nest every year at Potter Marsh, which is an artificially-created wetland in the south section of Anchorage. It probably wasn’t the Alaskan Engineering Commission’s intent to make a wetland there when they were developing the Alaska Railroad back in the 1910s, in fact it really probably wasn’t because one of their big construction camps was located there, but that was the long term effect and it’s a great local birding area now.

After I circled Potter (saw my first of spring ringnecked duck along with sandhill cranes) and walked part of the boardwalk, I headed to Pt. Woronzof. The Anchorage airport is out there but trails and roads are accessible around the exterior of the airport grounds. On one of the utility poles, I saw the first banded bald eagle I’ve ever seen in Anchorage.

And then I went out to the overlook at the point. I don’t usually see a lot of birds there. But what it is, this time of year, is wood frog mating season. Wood frogs hook up in local ponds and wetlands for a week or so every spring before they head back out to do their froggy thing. But for that week or so, do they get verbal! I know they’re not birds, but who could resist this?

A brief tangential note here: a few years back I got to go to Nome in early June. It had been a late winter and all the migrants to the far north were basically stopped at about that latitude waiting for the snow and ice further north to clear so they could head for their breeding grounds. It was amazing. But what really shocked me were the snipe. None of that sneaky surreptitious stuff, they were hanging out on light poles, power lines, squawking up a storm. “Oh, another snipe” was the common refrain of the trip.

So when I heard a noise I couldn’t quite place as I was traveling through the Lake Hood sea plane base area, I stopped the car and looked at the fence. And looked closer at the bird perched on the fencepost. It kindly turned its head sideways and yup, a Wilson’s snipe. And it was calling, loudly. I don’t know why they have such a hidden reputation. In my experience, they’re not shy in the slightest. I saw two more within the next ten minutes, yelling on the side of the road. 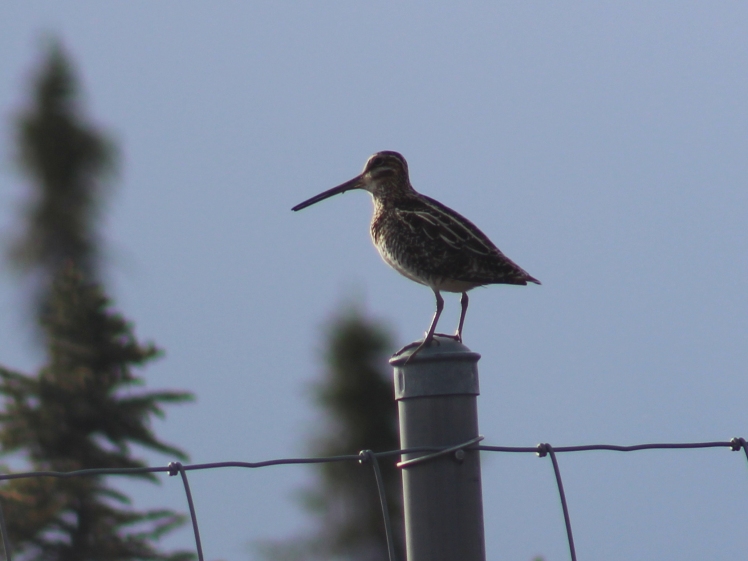 So that was my Saturday. How was yours?