This time with a memory card in the camera. I’d found a full one in my wallet so I copied everything over to the laptop and deleted all the files so I once again had a mostly empty card. (Okay, I need to be clear here: I’m an archivist. I don’t regard sd cards as permanent–or even really reliable–memory. So I’m well aware I’m taking my chances in regards to the current reliability of this sd card but I’m careful about transferring stuff off of cards and onto backups, I promise.)

Today’s wanderings began with a drive up Whidbey Island to the Samish Flats. There’s some state lands there with a parking lot and trails and according to the Washington state website, loads of overwintering migratory waterfowl. The mapping said it was about an hour and a half drive and I didn’t have any plans and it was chilly out (31F) which didn’t encourage me to go for an immediate walk close to where I was staying, so I figured why not?

By the way, if you’re going to hang out in this part of the world, go visit the Washington state website and pick yourself up a Discover pass. It’s the pass that gets you into all the state parks and other lands. It’s $30 for a year, can have up to two car license plates listed on it*. Day passes to any of those parks or game management areas or whatever are $10 so if you’re spending more than 2 days, it’s worth it. Also since WA has all these obnoxious private beach and tidelands areas, if you don’t get a state parks pass, you’re probably not going to be able to get anywhere near the water unless you find one of the  county parks which are pretty few and far between.  You can order the pass online and they’ll mail it out to you pretty quickly, and if you don’t order it in time, they’ll email you a temp pass that you can print out and use for about two weeks.

But back to the drive. As near as I can tell, Bayview Edison Road which runs north toward the Samish Flats from Hwy 20 (which runs between I5 and Anacortes/Whidbey Island) is bald eagle central. I went from wondering if I’d even see one to feeling like I was back on the coast of Alaska! Solo, in groups, adults and juveniles, and some of them being quite noisy indeed. Maybe they like eating overwintering migratory waterfowl because some of the flooded farm fields edging the road were packed with ducks. Raft upon raft of northern pintails and American wigeons. And any number of trumpeter swans mixed in.

Samish Flats wasn’t really what I’d hoped for. It was probably just timing. The Skagit Valley is replete with overwintering migratory waterfowl all over the farm fields, but apparently they weren’t hanging out in this particular game management unit this morning. I saw far more ducks and swans en route than I did in my hour long amble along some of the trails. But it was a very nice walk until it started warming up which is when those trail areas which were only slightly above the level of the surrounding flooded fields (and some weren’t) started to go from crispy frozen mud to very slick not frozen mud. Thankfully I’d already gotten in a nice walk at the point and didn’t mind heading back to the car. Especially since I knew the roads in the area had some decent verges and I could get better looks at all the waterfowl I hadn’t seen in the unit.

But don’t let me diss the Samish Flats entirely! I saw at least three female northern harriers (possibly four) working the area and watching them always makes for a great day. Since northern harriers aren’t really known for hanging around in areas with other harriers, it was pretty cool to see more than one during my walk.

I took a quick driving detour north around Samish Island where I mostly saw even more bald eagles and then coming back onto the flats I pulled off the road to let the car behind me pass since I wanted to take my time and I didn’t want to irritate the drivers stuck behind me. So glad I did! I ended up about 20 feet from an American kestrel sitting on a wire. Great view. Heading back down Bayview Edison Road to 20 was still bald eagle central but now there was an occasional kestrel hanging out in between too. 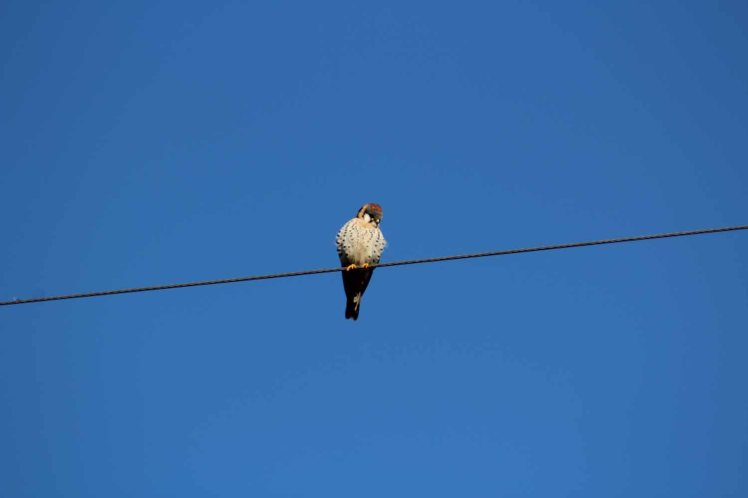 I headed back to south Whidbey with a stop at Deception Pass State Park (again with the Discover pass). And though I’ve been to DPSP bunches of times in my life, I’d never before seen it so empty. If you don’t like crowds, it appears that Monday afternoons in February are the time to visit. This was actually pretty nice because the entrance road runs along the shore of a lake. I was able to stop and take a closer look at some mergansers which turned out to be hooded mergansers which I haven’t seen in quite a while! If I’d done that stop for several minutes on any previous visit to DPSP, I probably would have been dragged from my car, beaten, and thrown into the lake. Today, nobody even came up behind me or came from the other direction.  At DPSP I also got to see some hermit thrushes, a spotted towhee (which threw me for a second because I’ve generally seen them in southern California and the markings are a little different) as well as another nice view of a golden-crowned kinglet.

But that’s enough of the driving itinerary. Here’s the bird list. 34 today if I’m counting right and I won’t promise I am. Oh, and there should be a scaup in there because I saw a whole raft of them (with two redheads mixed in) but I never did figure out if they were greater or lesser. I really need to learn that differentiation better.

[Edit to OP: make that 35 + the unidentified scaup. I saw Canada geese as well. Granted I saw them right after a visit to a local craft distillery tasting room, so that might have something to do with the fact that they didn’t make it onto my log.]

As for the mammalian life, I saw a harbor seal at Deception Pass State Park and a lot of blacktailed deer all over Whidbey. 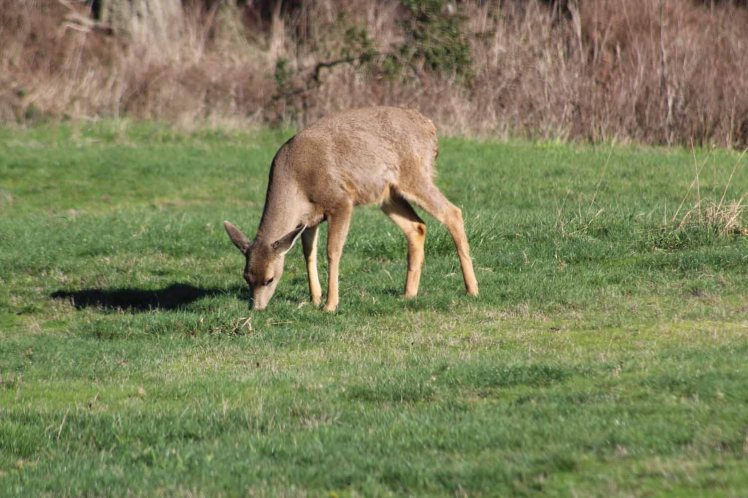 That’s pretty much it for the WA birding for this trip unless I see something truly spectacular en route back to SeaTac tomorrow. If I do, I’ll keep you posted. Thanks for coming along for the ride.

*By the way WA: are you listening? This two license plate only thing really stinks for travelers/tourists who visit regularly and rent cars because it’s unlikely any of us are going to get the same rental car twice. Consider offering a transferable pass at a higher rate. I’d tell you to look at California’s state pass but I don’t really want to pay $180 a year for WA. For one, their state beach bathrooms are considerably nicer. But I’d pay more than $30 to be able to get one that went with me, not with the car.