Once again we left Pocatello early, about 7:30 a.m. and headed north.  We slowed at Swan Pond but pretty much drove straight through, past Island Park, West Yellowstone, the Madison turn outs, Norris, Canyon.. with little in the way of stopping till we were coming off the Dunraven pass.   About 11:00 a.m.  we saw our first bear. 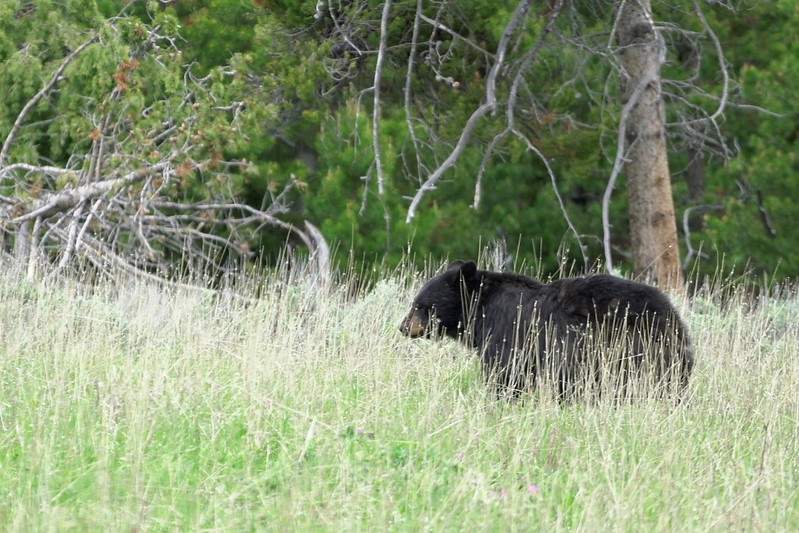 Not much farther down the road, maybe a couple of miles there were two more black bears. Now, black bears come in all kinds of colors so there was one black black bear and one gold black bear. There’s a good chance these are siblings only recently on their own. 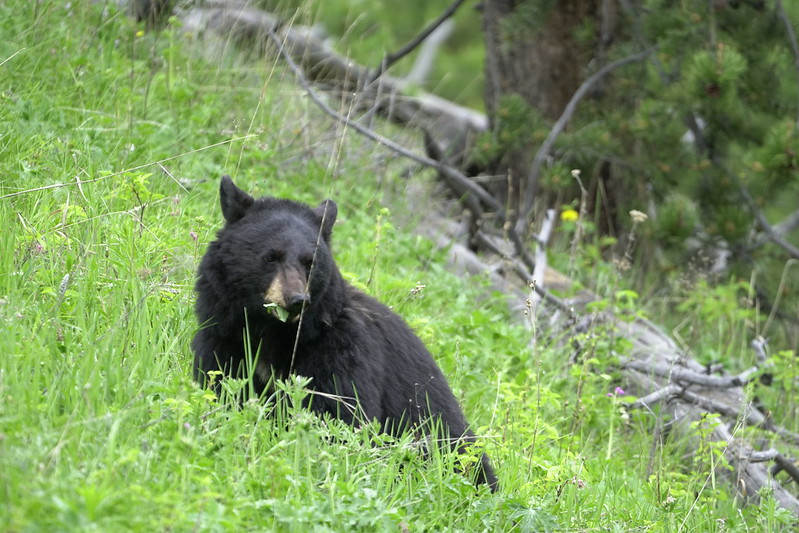 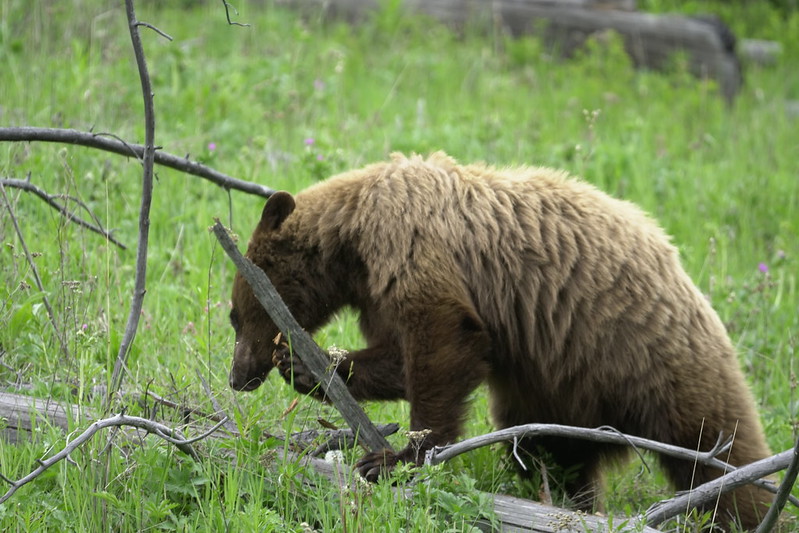 WOW we were one excited car to see so many bears! But wait, what’s this. A few more miles down the road and there’s another gold colored black bear. 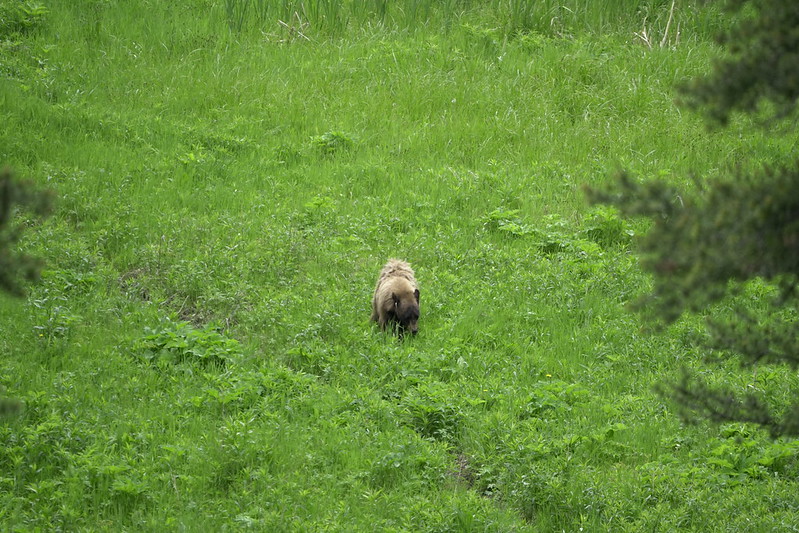 Finally we are off the mountain. We turn north at Roosevelt heading for the Lamar valley home of the wolves and the largest herds of bison in the park. We always hope to see wolves. Heck, we always hope to see bears and with this bear bonanza we don’t know what to expect. There are several places in Yellowstone where you can sign up for a trail ride. I think Roosevelt is a good place for it. 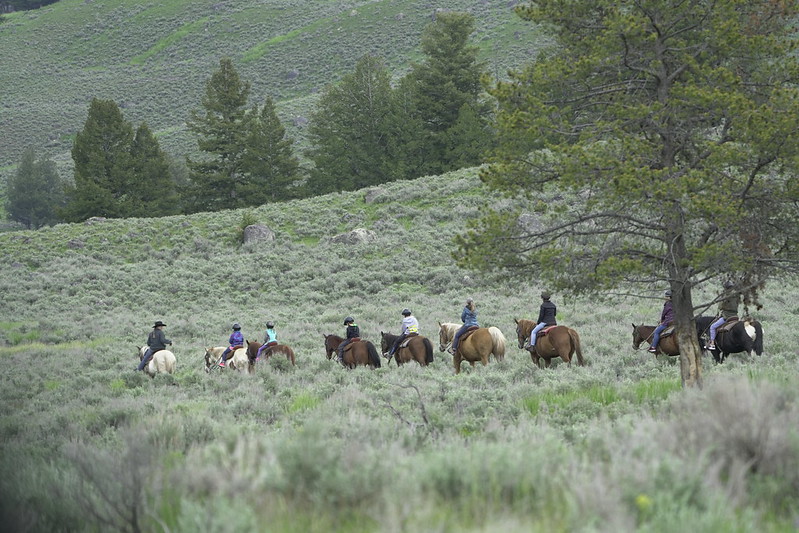 We pulled over for lunch near one of the wolf den sighting spots. We did not see wolves, though we did spot an otter! I’ve never seen a river otter in the wild so that was very exciting. It was so far away and so active I was unable to get a photo. 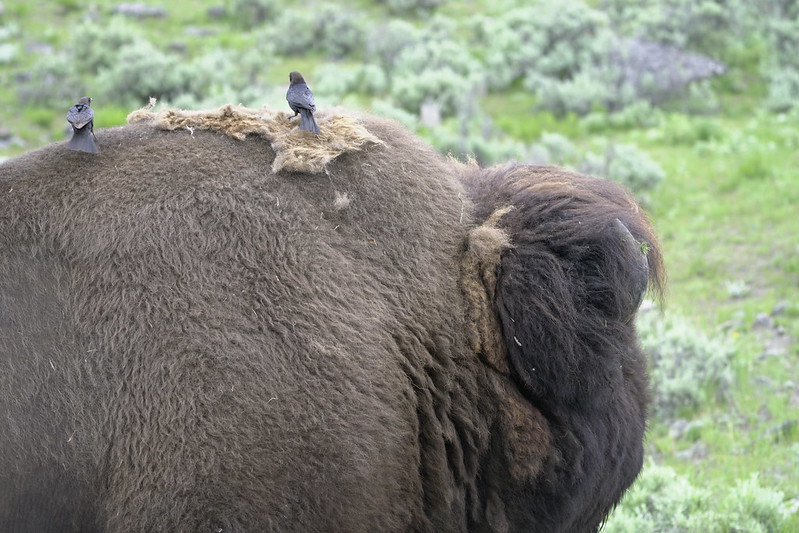 We drove till the road dead ended where I might try camping: Slough Creek Campground . It was quite surprising that this spur road didn’t have the number (100’s) of ground squirrels out and about compared to our last trip (two weeks earlier), and none of them posed for me either. There were very few birds, no bald eagles, and only a lonely Cinnamon teal in the pond. No use being down-hearted, after all we did see 4 bears!

The wolf quest continued on through the Lamar valley towards the Northeast entrance. I was hoping that the Mountain goats would be visible. We pull over at every bear/wolf/bison jam. At one of these a wolf is pointed out to us. I am not willing to scramble down the hill and when John realizes this he holds out his hand for my camera. This is quite a surprise for me since he doesn’t take a lot of photos. I put it on point and shoot mode and hand it over. This is too exciting. I think there was much jumping up and down and squeaky noises, all very much internally I assure you. After all … dignity, always dignity. 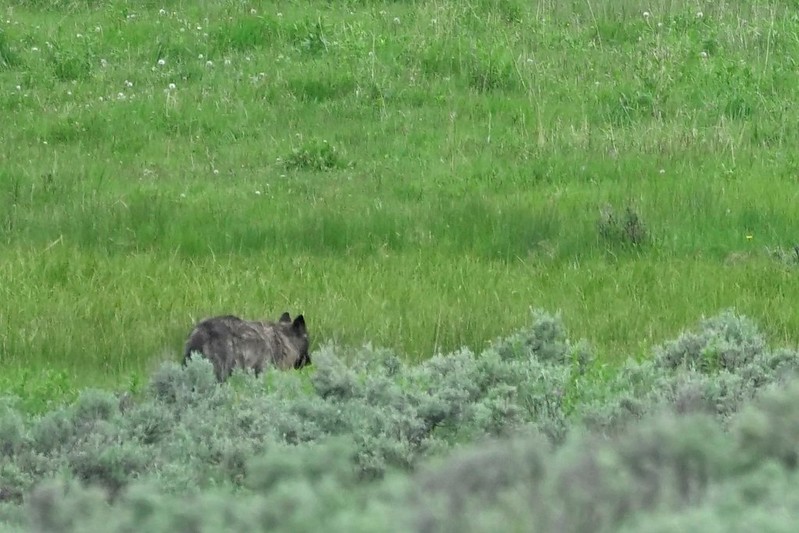 Well after that excitement I suggested we just drive home, I mean what can top that? But I was persuaded to continue. We got to the mountain where the mountain goats live and they were there, tiny specs of white fluff on the mountain. What is snow, what is goat? The goats move, and they have legs when I see them in my camera. 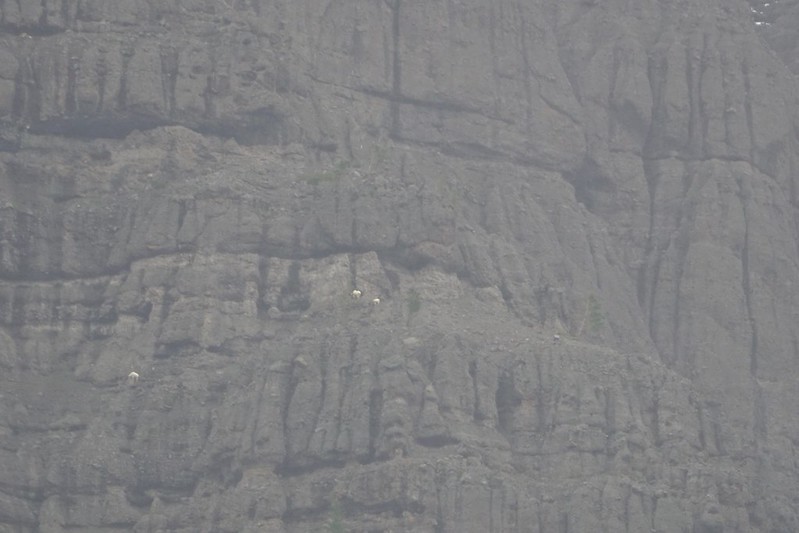 So we’re there taking pictures and trying to find them and of course we cause a jam. Bill notices that the people in the car behind us are not looking at the goats like we are. Instead they are looking into the nearer forest verge. And yes, there are two more black bears!! I could not believe it. The pictures I took did not come out. The bears were in a hollow behind tall grass and far enough away that I just gave up. Our count is now at 6 black bears. 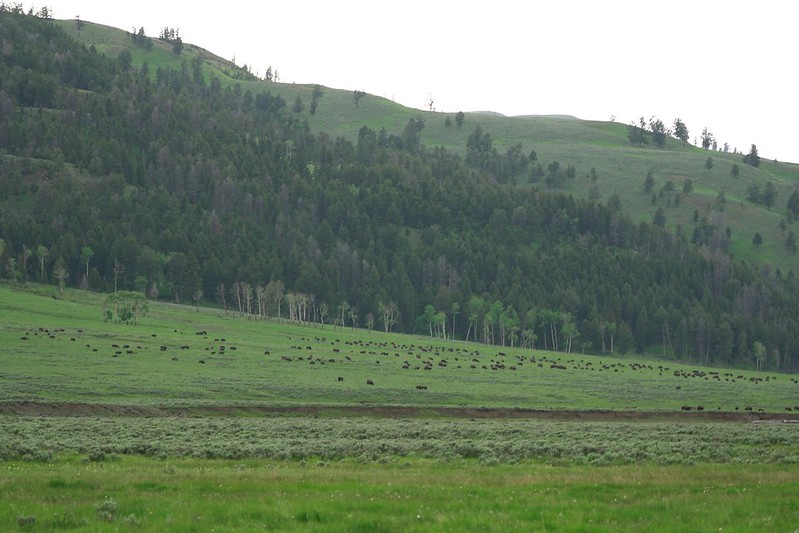 Lamar valley is home to hundreds of bison. Here’s a herd with youngsters and lots of frolicking going on.

So we’re taking photos of bison and the women near us with spotting scope casually ask if we have noticed the WOLF in the midst of the bison. I thought the bison were moving/running (not a lot but in small bunches) for fun or for the cool weather. It is only when I got home and the photos on the computer that I found this wolf in the middle of my bison herd. 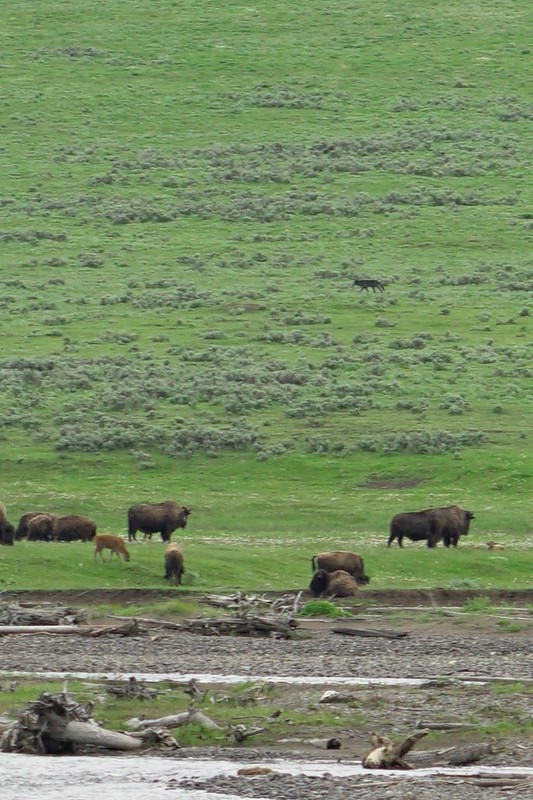 Once I know there’s a wolf out there I work to get his photo, he’s so far away it is very difficult. 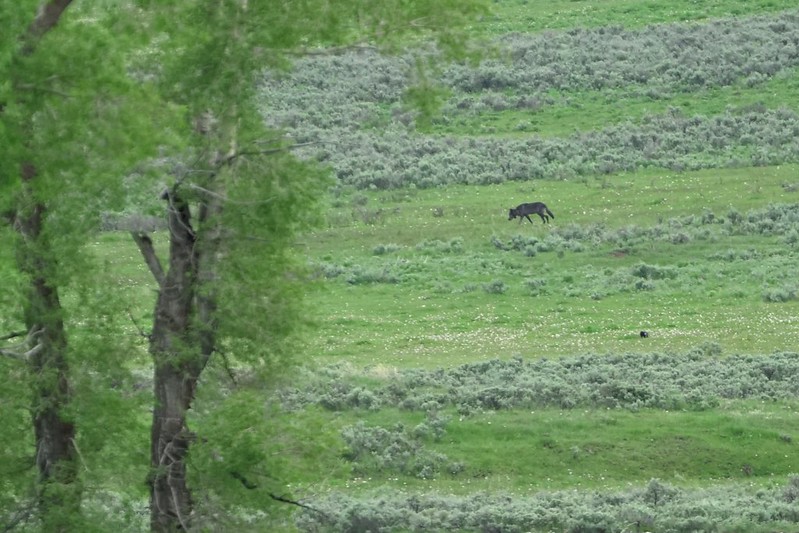 At one point he manages to chase an elk fawn out of the mountain tree line and down behind the cottonwood trees along the river. We do not know what happened next, but he didn’t come back out while we were there. 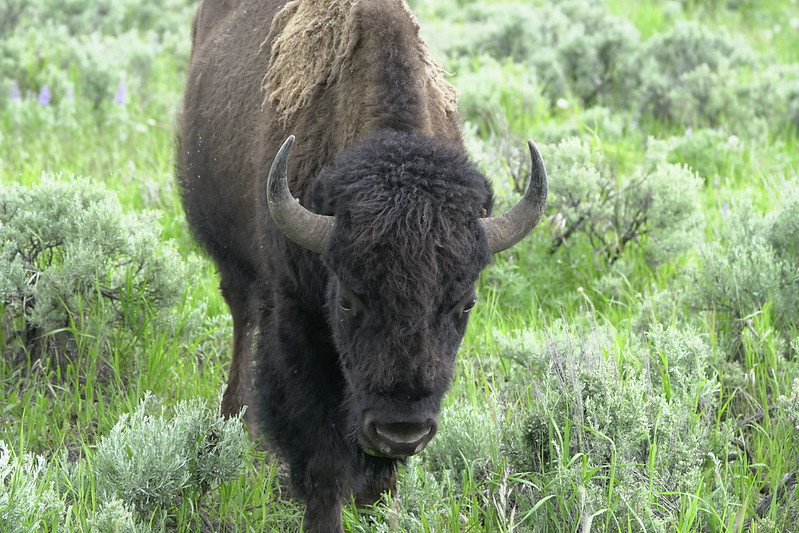 I’m so stunned by our good fortune. Whenever I bring people to Yellowstone I always hope for wolves but I’ve only rarely seen them. I do love the bison though. Easy to spot and identify and the youngsters are just so freaking cute. 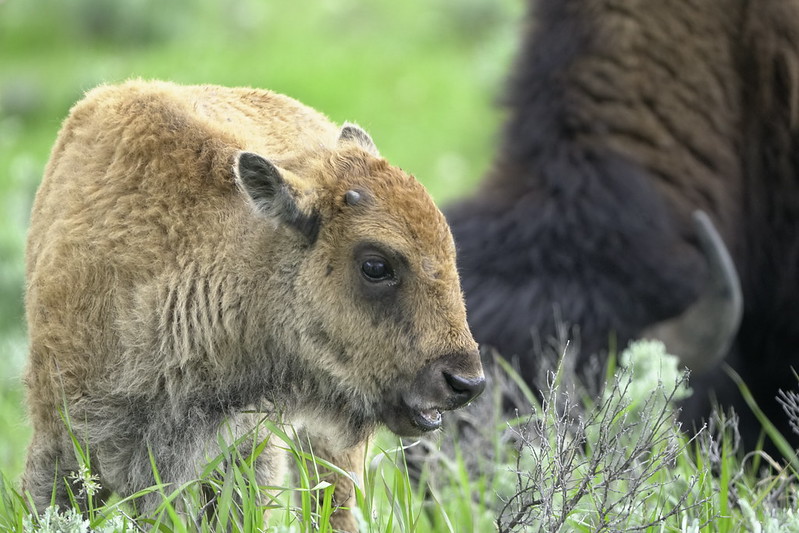 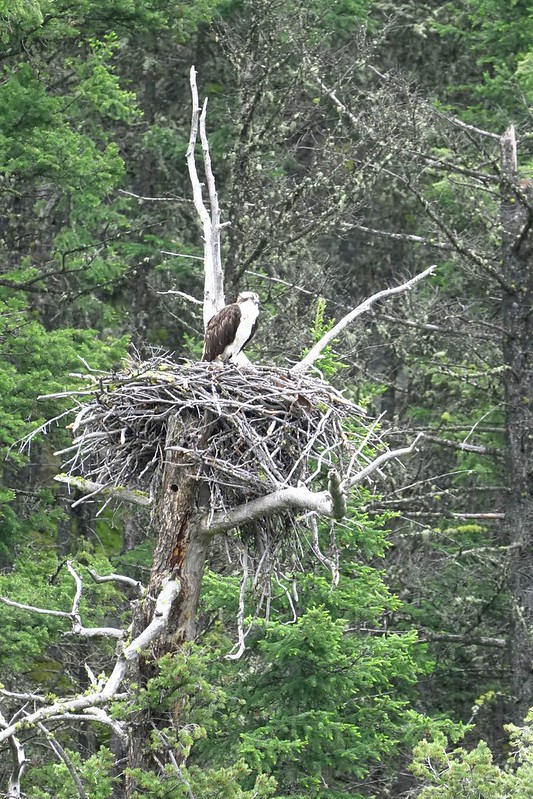 What I love about that osprey nest is the lack of colored twine and tarp scraps. This osprey does not have human debris available for it’s construction work. The Osprey was a surprise but now that I know where this nest is I’ll be able to come back on a more regular basis. It is near the cliffs where someone once pointed out Great horned owlets. I always hope to find that spot again too.

This handsome fellow was willing to pose! Common raven 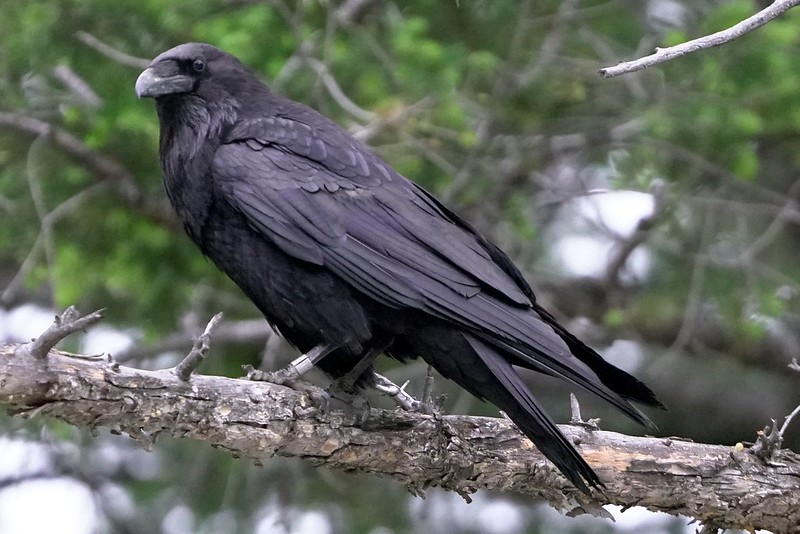 We leave Lamar valley heading towards Mammoth. Just a contented drive out of the park. On the other hand I’m always hoping to see something from the feline side of the wild (sadly no luck there). But there are a few (maybe 7) cars pulled over at this parking turnout and YES! It’s another black bear. One where I can get out of the car and take photos, not just hope that the photos from the car will be good enough. There is a valley separating us from this bear. 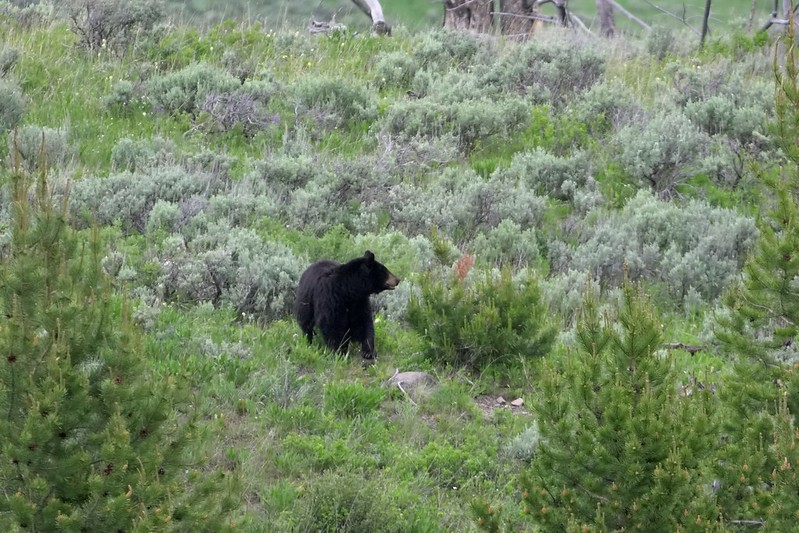 And a few miles down the road (it’s like they were spacing themselves along the road at regular intervals for us) another black bear, this one brown with two cubs!!! 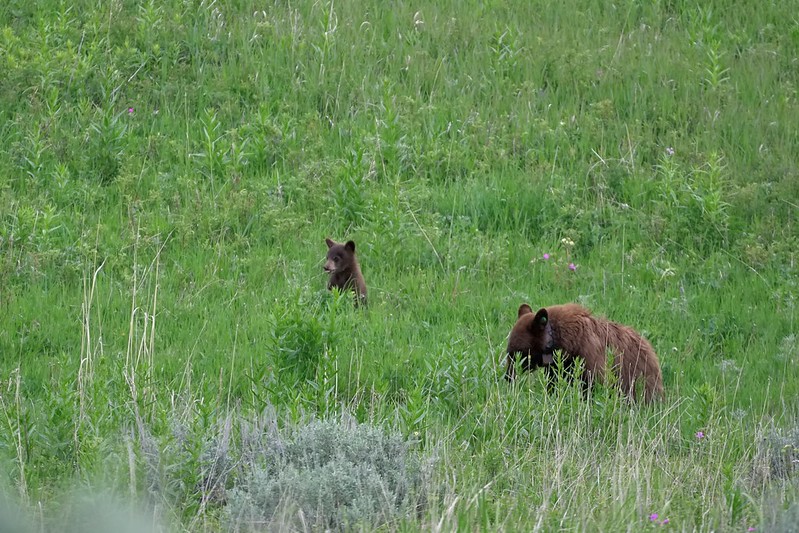 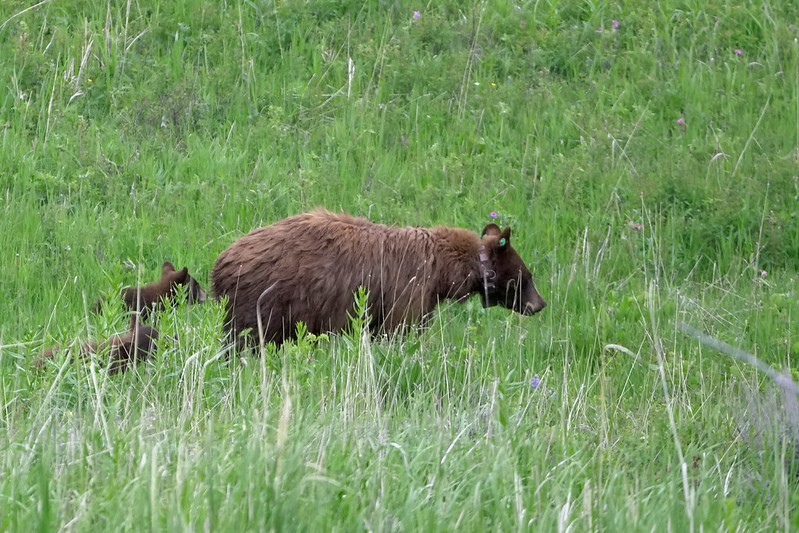 I’m stunned. I really thought that would be the end of the bears, but no. It was impossible to pull over, but the traffic was stopped so we got to watch. Sadly I was unable to get photos. I put the camera on autopilot and rested it on the window and tried. The drama of this sighting was amazing.

The mama black bear (11) and her two black cubs (12 & 13) were grazing when suddenly she sends her two cubs up a tree. I’ve never seen a bear charge till now. That was one unhappy black bear mama. She turned and charged down the hill towards the road but (thankfully and much to my relief) at a diagonal. Everyone in all of the cars (no one was standing along the road) watched her run. Someone in my car told me she was charging another bear, a gold black bear (14). Whoa.

Eventually I was able to see the chase in my rear view mirror. Two fuzzy bear butts moving fast, one large gold fuzzy fur waving jelly butt being chased by another large black fuzzy fur waving jelly butt. Those bears were really moving fast. So very scary how fast that mama bear moved. Before we got to this jam I we passed a guy getting out of his car, maybe a several hundred feet away from the bear spot. I hope he didn’t walk too far… 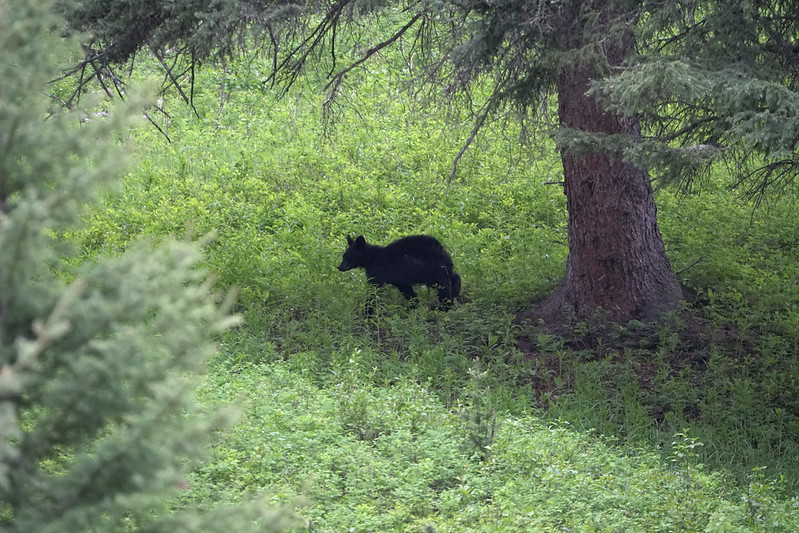 There were more elk, mule deer, and bison to see as we drove out of the park. I think I’m still giddy about the number of bears and seeing wolves! Wow. Oh, I did see a number of birds too. — Jenny 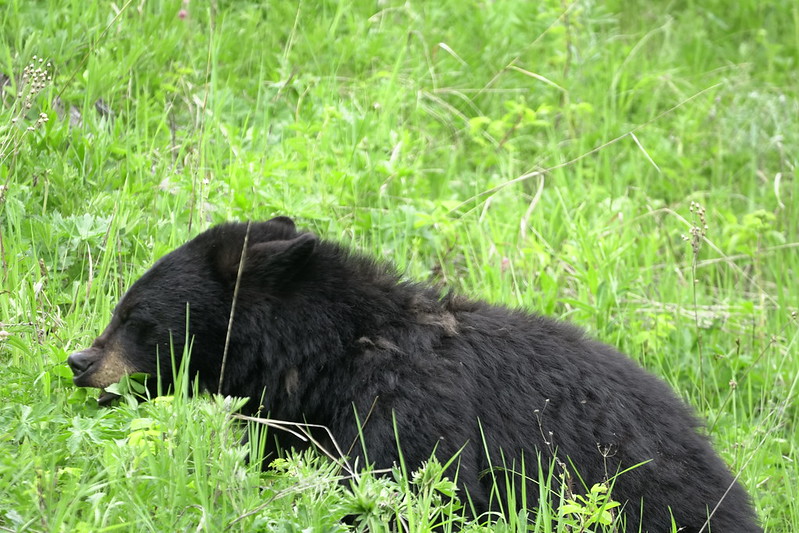