I went birding at the Camas Refuge back in 2008 with my aunt Susy. We were walking around and spotted this gentleman with a camera and spotting scope. He had found a tiny Northern saw-whet owl napping with a mouse still in it’s talons. Such an adorable bird!

Here’s my mediocre photo of that owl 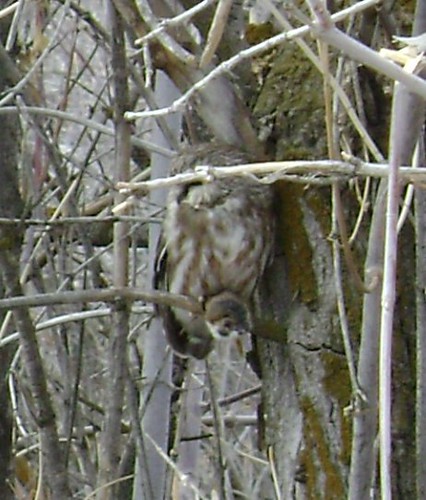 After reading a couple of academic articles I went back to All About Birds from Cornell for more digestible information.
https://www.allaboutbirds.org/guide/Northern_Saw-whet_Owl/lifehistory

What is interesting is that in one of the articles (a) their data matches the ability to spot these owls with what Cornell lists as their mating season. Another suggestion for spotting these shy owls comes from Cornell: “They roost during the day in thick conifers at an average of 11 feet above the ground, often hidden by foliage near the outer edge of a branch. They are occasionally discovered by mixed-species flocks of songbirds, which mob the predator in an effort to drive it away. Tuning in to all that commotion is one of the best ways for bird watchers to find these well-hidden owls.”

Another quote from article (a)
“Terrain ruggedness (TRI) had a negative influence on saw-whet owl occupancy, so owls were more likely to occur in areas with little topographic relief. Saw-whet owls may occupy rugged areas less if foraging conditions are stiboptimal. Saw-whet owls hunt from low perches on branches or shrubs, often in forest openings or near forest edges (Rasmussen
et al. 2008). There may have been a lack of such hunting perches or adequate cover needed by saw-whet owls when foraging in areas with high values for TRI. Alternatively, owls may have used rugged areas less if preferred prey were lacking there.” – p 139

So I need to get out to potential Northern Saw-whet owl sites in February and it’s likely they’ll be interested in the flatlands of the Snake River Plain if there is water, and lots of trees/brush that do not have serious canopy cover. I’ll have to try this out next year.