Let me just say: Chincoteague in August? Just do it. 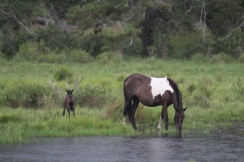 You’ll probably get some rain, some sun, tons and tons and tons of mosquitoes, but the place mid-week and mid-month wasn’t swarming with tourists, which was nice. My friend and I rented a little cottage on the outskirts of Chincoteague town and it was just perfect. Prices weren’t bank-breaking (unlike during the week of the Pony Swim and auction).

We spent most of our time driving out to and around the Refuge. Thankfully we saw the ponies lots of times so my friend was relatively patient with my birding, since she’s decidedly not a birder. But she was once a horse-crazy little girl and read all the novels, so we managed to make it work.

I’m super grateful I had my national parks pass in my wallet because the NWR is the place to go for birds and ponies and other wildlife and it’s either $20/day or $40/season otherwise: we ended up driving out there once or twice a day for the three days we were there and it was so nice to just wave the pass at the park rangers on our way in. Below is an altercation between a couple of great blue herons that we watched at the NWR.

There’s several hikes at the NWR, but between the heat and the mosquitoes, I wasn’t much in the mood to hike distances. We hiked out to the lighthouse once, did the woodland hike out to the pony viewing platform, and thankfully after 3 pm the wildlife loop opens up to cars and you can drive that (the mosquitoes would have taken me out there if I’d tried to walk that). The main road takes you out to the beach which was the most packed section of the NWR, but even there we had plenty of wildlife viewing, including some fiddler crabs hanging out in their burrows which was fun to see. One of the things we didn’t know was an option and so was completely booked up before we got there, was a bus tour ride out on the service roads offered most mornings: that’s definitely on the list if I ever make it back. But I’ll be sure to reserve a spot early!

We also did one of the hour and a half long boat rides which went partially up the channel between the islands and netted me quite a few birds (and more views of the ponies.) It was a pretty touristy ride but once the boat captain figured out I was looking at birds, not scenery or ponies, he let the guide chat with everybody else about everything else and we had a pretty good talk about what species we were seeing.

Loads of shorebirds, wading birds, gulls and terns. Even a few sparrows and others, but it was definitely heavy on the water-based birds. I probably would have picked up a few more sparrows and warblers but I was completely out of my element on the LBJs there and didn’t get enough solid looks at them.

We also saw rabbits, deer, the subspecies of squirrel that used to be on the endangered species list but isn’t anymore, and of course, even more ponies. And some sort of moth (several of them) that were emerging from cocoons next to the table where we were having some early morning caffeine one day. 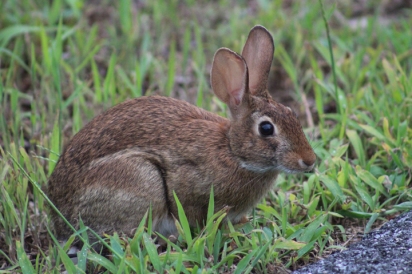 53 species of birds isn’t bad for me! Plus my friend lives in Annapolis and while I was at her house and in the vicinity I also picked up a yellow-bellied sapsucker, a downy woodpecker, a pileated woodpecker, an Eastern wood-pewee, a blue jay, American crow, fish crow, and an Eastern bluebird. The sapsucker, pileated, and wood-pewee were all life-listers for me too. I clearly need to spend some more time on the east coast! Good thing I have one more Florida trip coming up in December.

I’m totally in love with the black skimmers: who could resist those bills? I’m a little bummed that I got only a glance at the pileated woodpecker as it flew overhead: I’ve been trying to get one of those on my list for years and I know they’re pretty common, but apparently not in the places that I’ve been going. Maybe someday I’ll get a better look at one.

Oh, and if you’re not convinced yet, Chincoteague (the town) has some of the most amazing ice cream joints I’ve ever been around. Maybe it wasn’t terribly healthy of us, but I can forego a regular meal once in a while for a truly great ice cream. Let me just say: whiskey brickle. Oh. My. Goodness. So worth a 20 minute wait in line, some of which was outside in the rain.

3 thoughts on “Chincoteague in August”