The five of us (Shanna, Jenny, John, Bill, and Helen) gathered at my house just before 8:00. We loaded the car and headed north to Yellowstone. It’s so much fun to be in a car with a bunch of artists. So many ideas and projects are discussed. It is very inspiring. On our last trip through Island Park Shanna marked in the car’s navigation system the locations of the Swan lake and the road-adjacent Osprey nest. This made those stops much easier.

The Swan lake (or rather pond) was mostly frozen over. But near the roadside edge was open water and this black and white bird was there. I didn’t realize that Buffleheads could tolerate such cold waters. 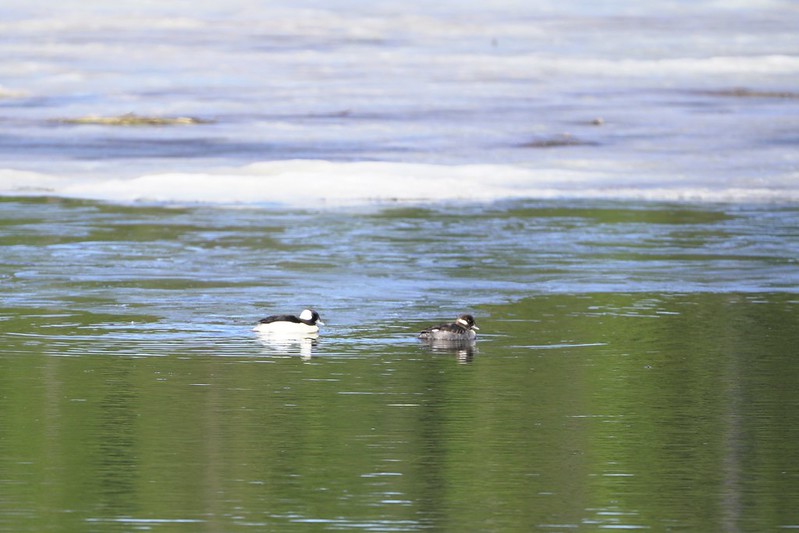 The bridge over Henry’s Fork (a tributary of the Snake River) had a small snarl of cars and people pulled over. We looked and then stopped too. There was a huge moose in the river. 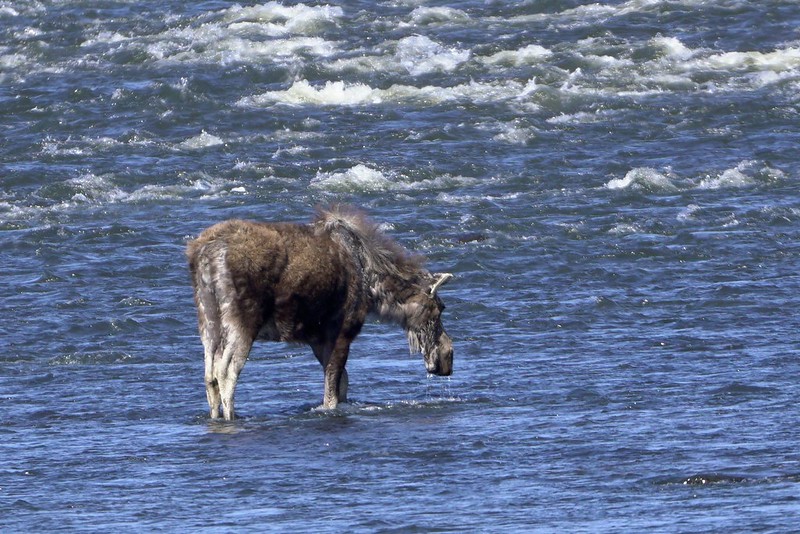 On the far bank was another large moose and a couple of lumps that looked like calves, though I could not get a good view with either binoculars or the large camera lens. 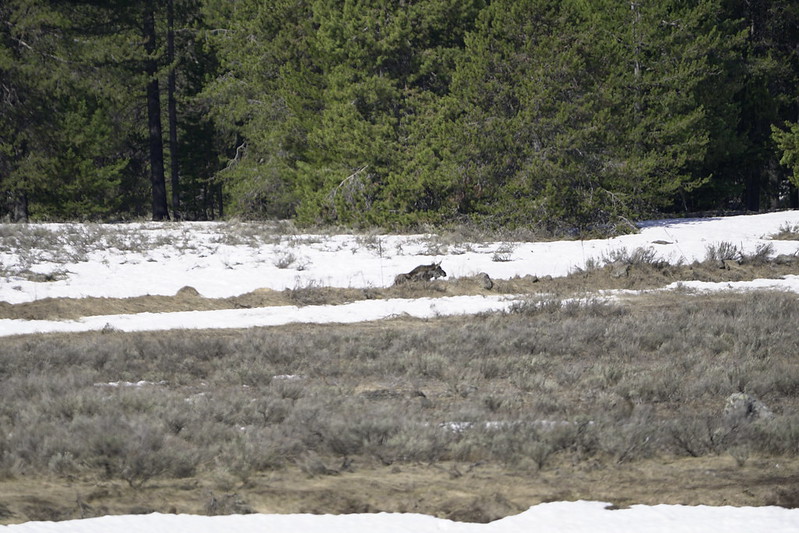 I always divert to the badly maintained road that runs along the river behind the main Island Park drag. You never know what birds will be there. This time it was a Belted kingfisher. 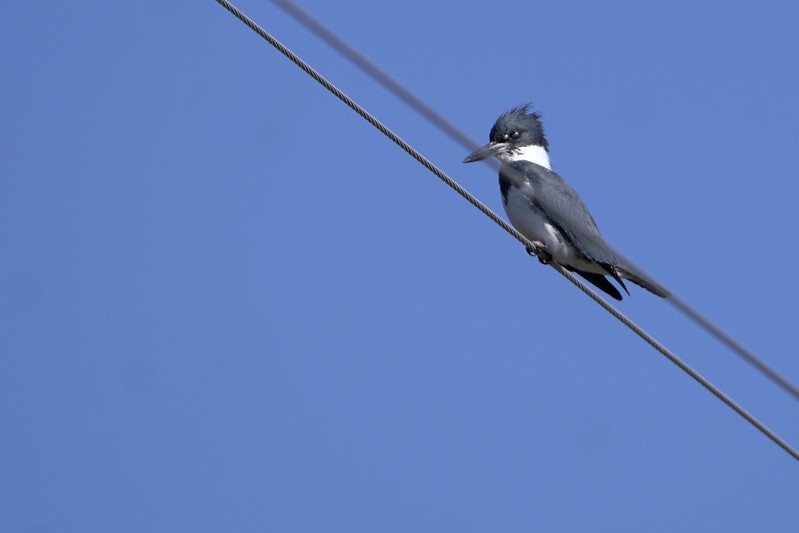 There was still a lot of snow so the road to the Osprey nest so we had to make due with just turning out. That worked fine. Looks like they may already be brooding. 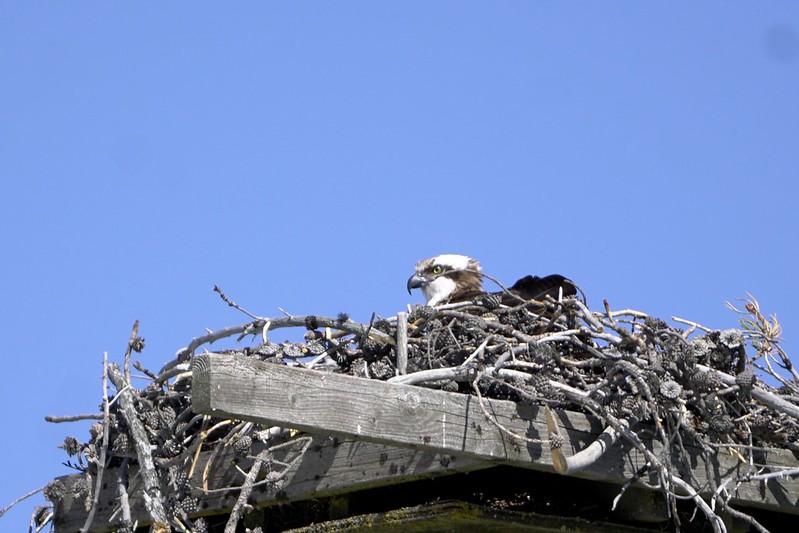 Once into Yellowstone we quickly found Bison. These were crossing the Madison river and I think this was a newborn calf. He was oh so tiny and wobbly and he was the only one. The other females were still huge with waiting. He had to swim the river it was cute and scary at the same time. 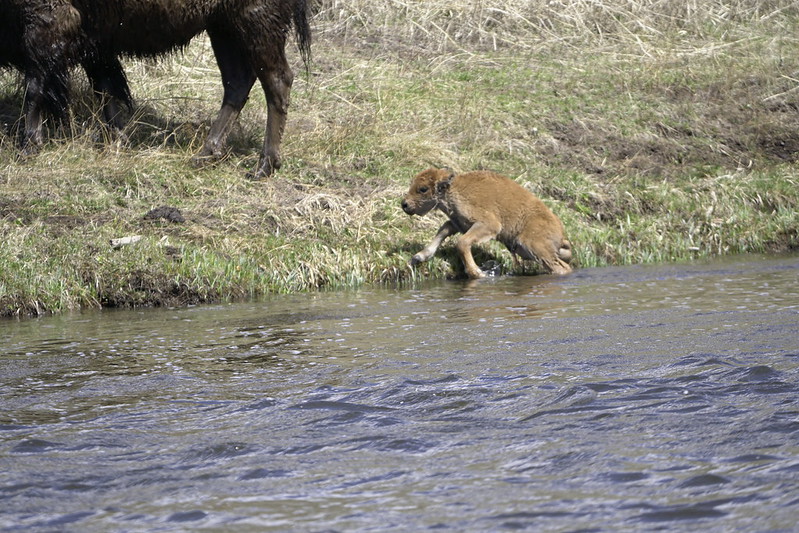 He had to climb out of the river and as you can even see in this picture he still doesn’t know how to walk right. Those long legs are very difficult to master. 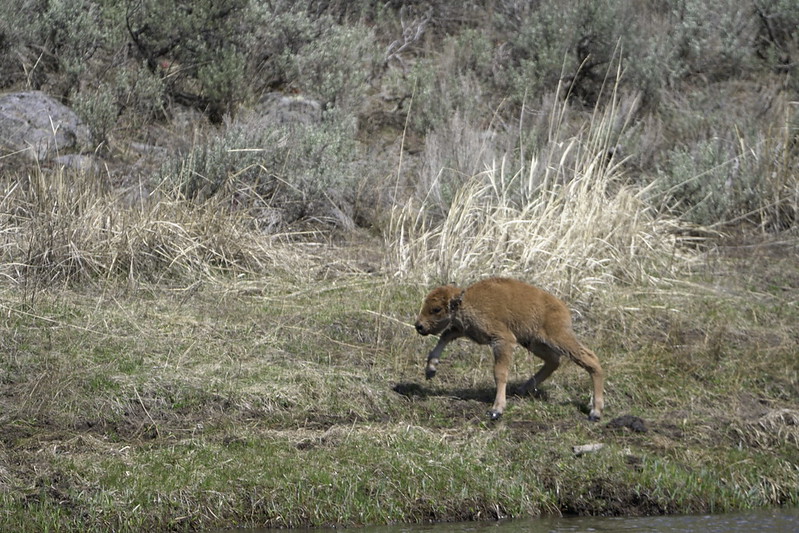 Once he made it to the sagebrush line he laid down and resolutely kept down. His momma would follow the herd and then come back. She’d nudge him, stand over him protectively, then walk off encouraging him to come with but he was having none of it.  She kept repeating this process as the rest of the herd grazed and slowly moved upriver. We did not stay long enough to know for sure how long he refused to cooperate but it was at least 15 minutes. 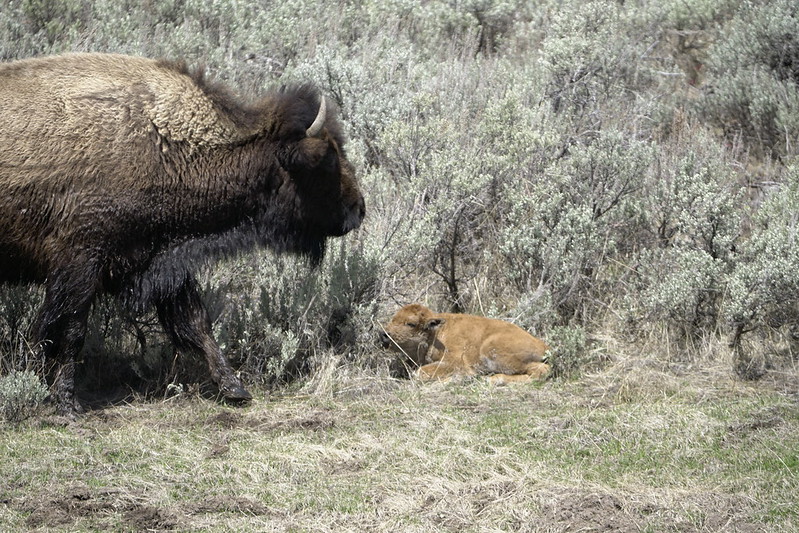 Farther along the Madison we came upon a gorgeous Trumpeter swan. 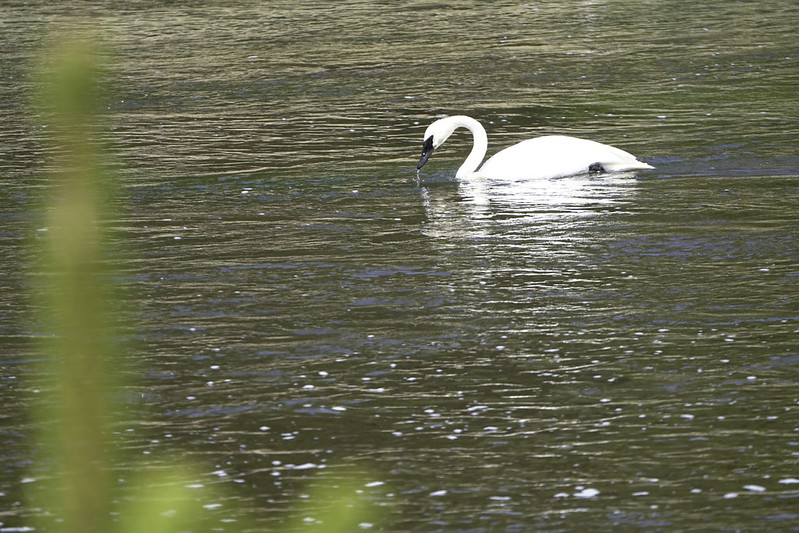 We stopped at Fountain Paint Pot walking loop and the Midway Geyser Basin walking loop. Unfortunately my asthma reacted to the altitude and so I just had to sit and watch and enjoy the peace. Well peace until the huge wind started.  I loved it. I don’t usually take much time to just sit and enjoy the place. 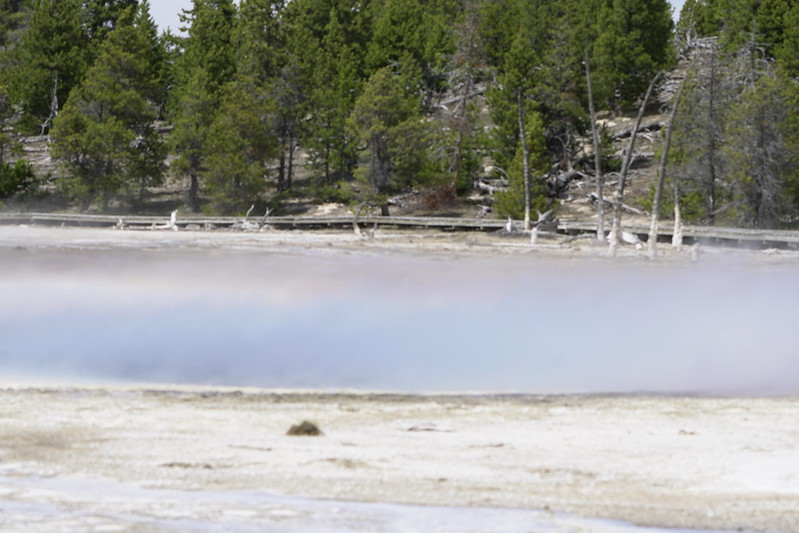 I don’t have a lot of geyser/hot pool photos. But I enjoyed being outside with the trees and mountains. 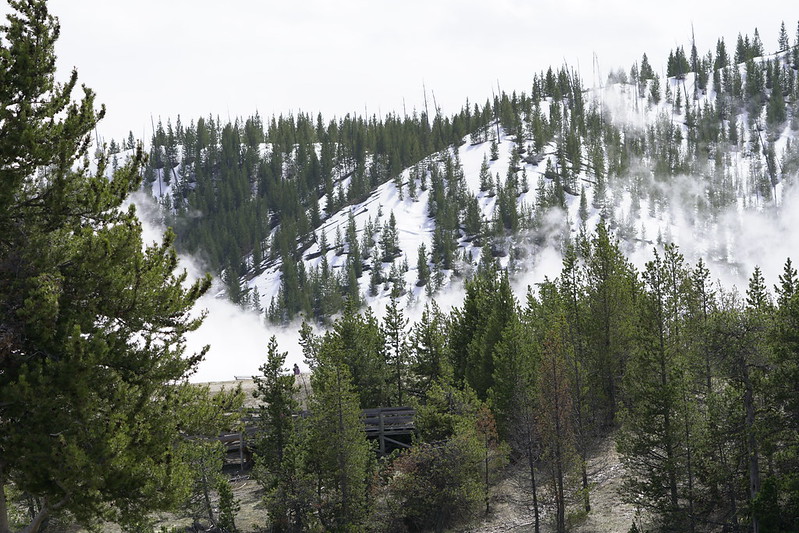 We stopped to take photos of another group of bison when this cheeky raven and one of his friends came begging. No we didn’t feed him, but clearly other people have. 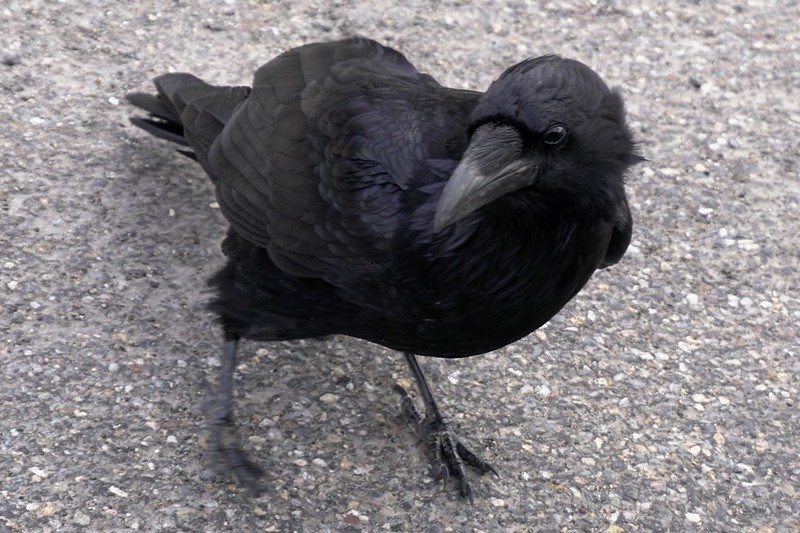 At Old Faithful we went to the Snow lodge and hung out and arted (drawing, color pencil work, needlework) and reading. It was a lovely time. Very peaceful.

There was one solitary Elk on this trip. Started out down on the grass trying to graze, but after awhile it did stand up. 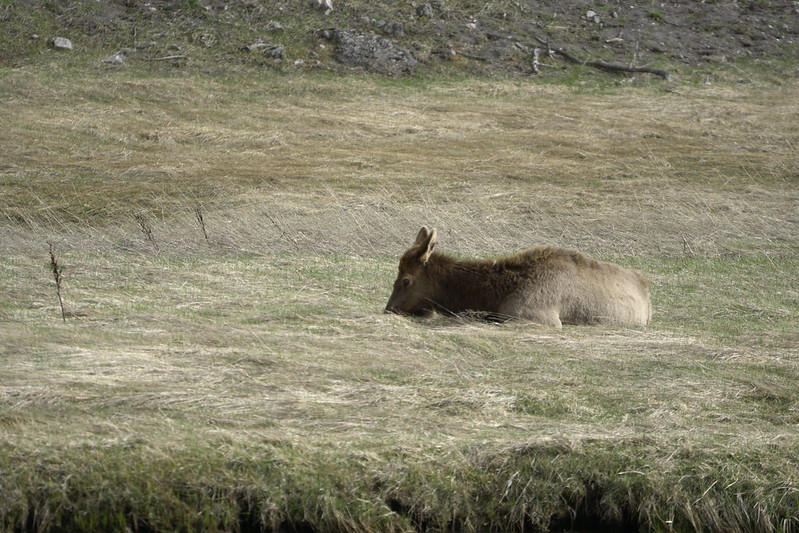 On the way home we once again passed bison. This time a small group of juveniles (probably males) who were walking along the road. I slowly passed with my camera set on automatic and resting on the drivers side window. I only had to hold down the shutter release. I really like this capture. He is not as close as he appears. I was using the big lens. 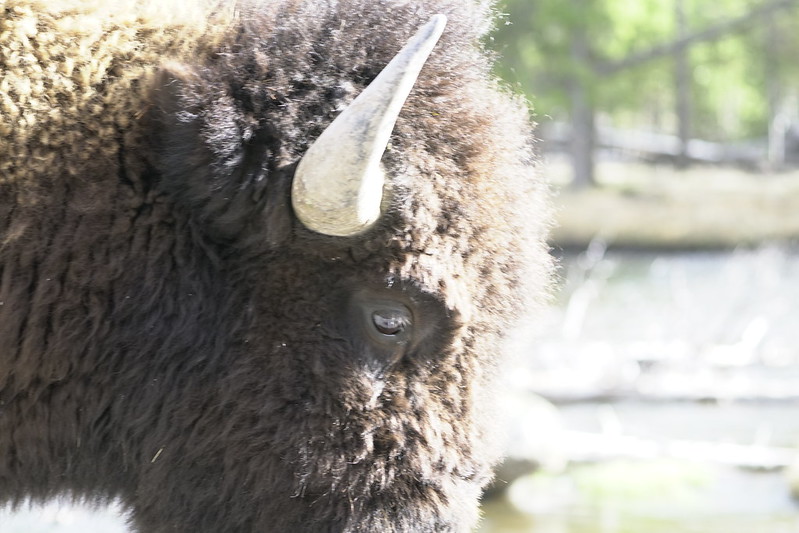 We then drove back to West and had dinner at the Gusher Pizza restaurant. It was awesome. My nephew Matt had suggested it. We were back home by 9:30.

It was a lovely and inspiring day.